THE SIMULTANEOUS SYNTHETIC CREATION OF AUDIO AND VISUAL MATERIAL

From 1988 we started putting electronic visuals together with our music, making analogies and connections between DJing and VJing, audio and visual. Through the 90s with our Hardwire/Hex projects with Miles Visman, Robert Pepperell and Stuart Warren-Hill we developed these ideas into software like VJamm, AV live shows and pieces like Timber.

That period and a more general AV concept will have its own story on AHOT at some point but first we want to come up to date. with some new more specialised AV work.  In 2014 we made a series of studies using parallel Midi control of Audio and Visual Synthesis. We use the term AVS to describe this and started the AVS project to experiment with the basic idea that a useful definition of Audio Visual Synthesis is the simultaneous synthetic creation of Audio and Visual material.

These studies are fundamentally AV work and can be viewed on our YouTube channel.

Ableton Live and its arpeggiators and effects were used for the audio component. Visuals were from the brilliant modular video software VDMX + Polyphonic 1.29, a custom Quartz Plugin video synth for drawing coloured shapes triggered by Midi (design by Matt Black, coded by Lukasz Boroz).

“We define Audio Visual Synthesis to mean both the synthetic creation of Audio and Visual material, and also their synthesis in the sense of these two information streams alchemically coming together, blending.”
Coldcut

One of the advantages of VDMX is it allows the construction of feedback paths, analogous to audio feedback a la Hendrix guitar or King Tubbys echo, where a certain proportion of an output signal is routed back into the input, causing oscillation which can be fine tuned within a critical range to provide interesting non-linear results. Feedback tuned to criticality balances on an information rich area between order and chaos… like life and consciousness itself. The same could be said of music, which is a balance between repetition and change. 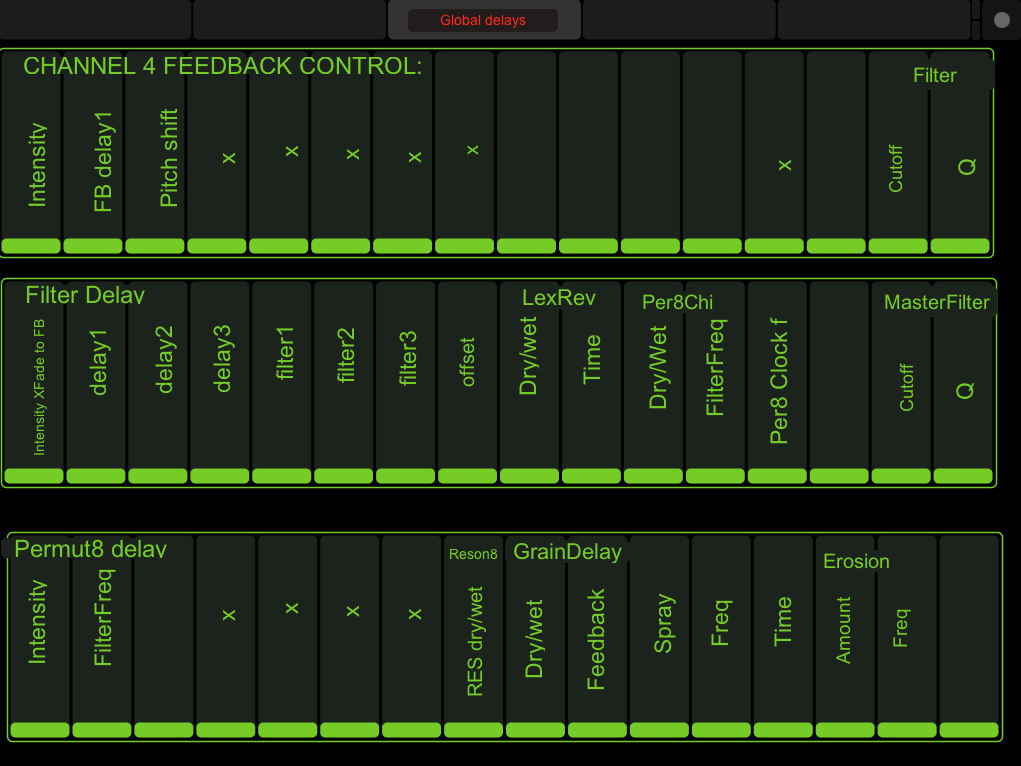 The relationship between audio and visual is plastic – not fixed

After playing with AV in many ways for some years we have concluded that the relationships between Audio and Visual streams are plastic, ie. not fixed. So in AVS there is no absolute correct mapping for e.g. colour frequency to sound frequency. The mappings can be set as required, creating relationships. Some relationships work better than others. As in real life relationships, using intuition and trial and error we (sometimes) home in on the ones that work best…

Below a link to AVS on Bandcamp is provided;  even though audio only versions of these studies are of limited interest, it helps us in SEO 😉